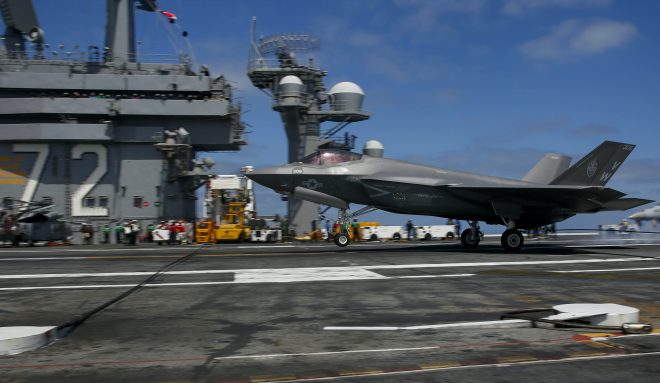 An F-35C Lighting II assigned to the “Black Knights” of Marine Fighter Attack Squadron (VMFA) 314 makes an arrested landing on the flight deck of the aircraft carrier USS Abraham Lincoln (CVN-72) on April 16, 2021. US Photo navy

The “Black Knights” of US Marine Fighter Attack Squadron (VMFA) 314 have taken their next step before deploying for the first time on Navy aircraft carriers.

“Many hours were spent in aircraft maintenance, aircraft launch and recovery at Miramar, other military installations and on board the ship to complete the training required to achieve these goals,” said the Major. Derek Heinz, VMFA-314 operations officer, in The version. “The Marines of VMFA-314 have gained the confidence to fight this aircraft and are confident that we can do it in combat if called upon to do so.”

The squadron, which will deploy to Navy aircraft carriers, is part of the 3rd Marine Aircraft Wing.

“The VMFA-314 is currently continuing its preparations for future deployments by hosting a Custom Ship Training (TSTA), marking the first squadron of F-35Cs to conduct TSTAs in the Marine Corps,” said the Marine Corps. in the press release. “This training will consist of communications rehearsals, medical drills, air operations and on-board exercises conducted en route, ensuring the squadron is ready to deploy in support of maritime campaigns.”

The squadron’s benchmark comes as the Marine Corps continues its Force Design 2030 initiative, an effort to modernize the service to operate in a region like the Indo-Pacific. The last service force design update released in April indicated that the Marines were still evaluating the correct combinations of F-35Bs and F-35Cs. The report also identified maintenance of the F-35s as a concern.

“Whatever the final [Approved Acquisition Objective] for the F-35, we will not be able to generate a competitive advantage for the fleets and the joint forces if we are not able to maintain these planes due to a lack of qualified maintainers, ”the report said. “Our current model of retaining this essential staff is failing. We need to change the talent management model if we are to realize the full potential of this capability. “

The Marines are replacing their legacy F / A-18C / D Hornets with F-35C squadrons to meet their commitment to deploy squadrons on Navy aircraft carriers, in addition to their F-35Bs for amphibious ready groups of Marine.