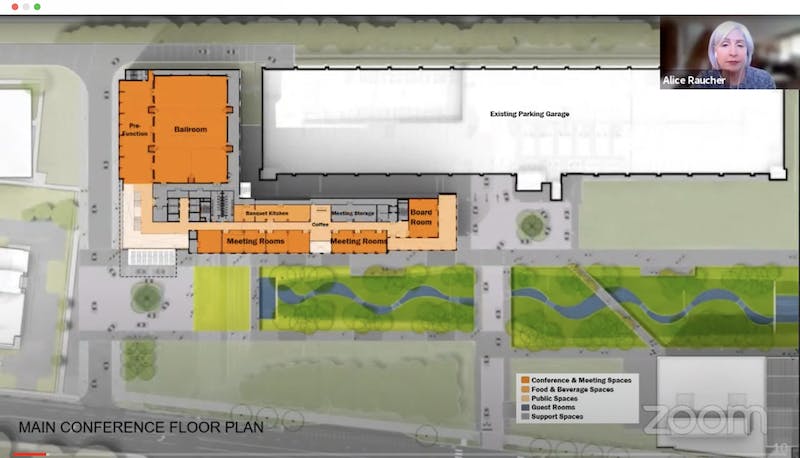 
Three committees of the Board of Visitors – the Buildings and Grounds Committee, the College of the University of Virginia at Wise Committee, and the Audit, Compliance and Risk Committee – met on Friday morning to discuss a number of projects and plans for the coming years. such as reporting on internal affairs within the University.

The session began with the meeting of the Buildings and Grounds Committee, which met to review blueprints for the new university hotel and conference center as well as a new athletics complex. They also discussed adding new air conditioning units to the Lambeth Field apartments.

University architect Alice Raucher presented her designs for the hotel and conference center, which will become a “hub” for students and the wider Charlottesville community. The designs include event and social spaces such as a cafe, meeting rooms, and a ballroom.

The hotel, which was designed by the Emmet Ivy task force, will be attached to the southwest part of the Emmet Ivy parking lot and its design will be coordinated with the Data Science building – located at the intersection of Ivy and Emmet – to ensure design continuity.

Raucher also presented plans for the new sports complex, which will include a new football operations center and an Olympic sports center as well as the renovation of the McCue Center, the current headquarters of Virginia football.

The committee hopes the new complex will help bring together student-athletes and establish continuity between the sports buildings on the north field as well as make them more accessible to pedestrians. The complex will be linked to the Central Grounds by a promenade extending from the Goodwin Bridge to the new Welsh Indoor Football Training Center.

Sports director Carla Williams and BOV member Angela Mangano and former college football player believe the new complex will not only help professionalize the University’s sports program, but also foster links between student-athlete programs. . The council intends to build a center for citizen leaders and sports ethics adjacent to the pedestrian promenade and the sports plaza to provide a forum for engagement for all university student-athletes.

Both the sports complex and the new hotel are designed to use the highest level of sustainability appropriate. The hotel’s infrastructure is ready for solar panels and construction includes plans to preserve stormwater. Sustainable designs in the sports complex include LEED certification of buildings to achieve low energy consumption and water conservation.

Colette Sheehy, senior vice president of operations and state government relations, then presented a proposal to address mold issues in Lambeth Field apartments resulting from negative pressure and humidity issues in the complex. The committee plans to replace obsolete building heating and cooling units – which were installed during Lambeth’s construction in the 1970s – with updated, more energy-efficient units. The project will cost around $ 14.5 million and will be funded by debt, which will then be repaid through endowment profits.

While the major capital plan for fiscal 2020 provided for $ 3.16 billion in funding for new projects, this year’s major capital plan has seen significant cuts due to budget constraints caused by COVID-19. Between Major Capital Plan 2020 and Major Capital Plan 2021, $ 142 million of projects were withdrawn per project proponent and $ 866.2 million of previously authorized projects are now carried over to future years.

Mazzen Shalaby, fourth-year Batten student and student representative on the board of trustees, expressed hope that Lambeth’s renovations would open the conversation about making housing on the land more equitable in the future, at knowing how to ensure that students do not pay equal amounts for prices very different from the housing conditions on the ground.

The Council then began its session on the College of the University of Virginia at Wise.

Donna Price Henry, chancellor of the University’s College of Wise, spoke about COVID-19, enrollment in Wise, the search for two new vice-chancellors and Wise’s strategic plan. She expressed satisfaction with Wise’s progress and optimism for the future.

“While I think we all face some uncertainties… in light of the pandemic and other factors, I think the future is bright for both U.Va. and U.Va. Wise and me look forward to continuing our partnerships, transformation and ingenuity with colleagues in Wise and Charlottesville, ”said Henry.

The most resource-intensive safety measure Wise has implemented to fight COVID-19 is the weekly prevalence test for 7.5% of the campus community, faculty, staff and students, as well. than testing all students returning to campus – testing only revealed four out of 1,110 positive cases when students were tested in the fall.

In addition to instituting a number of health, hygiene and sanitation protocols, Henry described the many new activities the Student Affairs team has organized for students outside of the classroom. These activities include virtual bingo, lawn movies, college-wide lectures and seminars on race, gender and society.

Despite a national decline in student enrollments at US colleges and universities due to stressors on family finances and economic uncertainty, Wise’s enrollment increased 2 percent, according to Henry.

The committee shared plans to develop Wise’s nursing program as part of the school’s overall strategic plan. The college is partnering with the University’s School of Nursing to address the shortage of qualified health care providers in Southwest Virginia and to deliver the Family Nurse Practitioner program in Wise. The General Assembly allocated $ 810,000 in funding to establish the new campus partnership.

To consolidate the Wise Nursing Program, the College is also working on the renovation of Wyllie Hall, which will serve as a dedicated space for the program. The College hopes to open the program by fall 2022.

Finally, Madeline Lawrence, fourth year student at Wise and member of the College Advisory Board, spoke about her enriching experience at Wise and the resilience of the community.

“I could definitely spend all day talking about other opportunities U.Va has. Wise gave it to me and other students, ”Lawrence said.

The Board then began its session on Audit, Compliance and Risks.

“I find that we are really good at retaining information as an institution and less able to dispose of it when we no longer need it,” said Gary Nimax, assistant vice president of compliance. “We tend to run into more problems when we have things we shouldn’t have than… getting rid of things too early. “

Finally, the audit committee discussed an external quality review in which they are currently engaged with a consulting company, Protiviti.

The quality review takes place every five years and involves Protiviti interviewing 20 senior leaders from academic divisions and the healthcare system and writing a report on the University’s audit and audit functions. The Visitors’ Council will then evaluate the report in its June session to see if the University is up to the standards of the Institute of Internal Auditors and see how they can do better.

The Council entered a closed section to discuss proprietary information about the U.Va. Medical Center.